When you live in a city, you are often the last one to go visit the attractions and historical sites. It’s only when you have an out of town guest that you go see what is readily available for you everyday. With 10 years in Nashville now, my wife and I have been slow to see everything that Nashville has to offer, so we have been making more of an effort to explore our own town.

On Labor Day, we finally made it to one of the places we had been wanting to see for a while – the Hermitage, home of Andrew Jackson. It was sputtering rain and in the 60s, but that sure beat the 100 degree temperature that registered two days prior.

Another piece of history that I have been meaning to explore more is Nashville’s robust Restoration history. After our trip to the Hermitage, we headed to Mt. Olivet cemetary to chase down the tombstones of several Restoration preachers, using a map I had found online. So, my wife allowed me to trounce through the rain looking for grave markers, while she comfortably sat in the car with the girls eating lunch. Here’s some of my finds.

Tolbert Fanning (May 10, 1810 – May 3, 1874) was a first generation restorer and close associate with Alexander Campbell. Fanning had one of the more interesting epitephs, which describes the twin goals of his life’s work. His tombstone states,

Two objects were near his heart. First, to restore the service of God to the order God gave in the New Testament. Second, to place a good, industrial, and literary education within reach of every youth. He labored to these ends during his life, and desired his property devoted to them after his death.

Fanning was dedicated to proclaiming the gospel, arguing for a return to the purity of the first century church. He edited a couple of different periodicals. In 1844, Fanning started the Christian Review, and in 1855 he would begin to publish the Gospel Advocate, along with William Lipscomb.

As his tombstone stated, he was also concerned with Christian education. In 1837, after graduating Nashville University, Fanning married Charlotte Fall and started a school for girls called The Eclectic Institute for Young Ladies, which lasted three years. In 1840, Fanning established another girls’ school and added a boys’ school two years later. In 1843, Fanning expanded this school to a college and named it Franklin College, serving as its president until the start of the Civil War in 1861. The college would eventually close in 1865 when it was burned, and the Hope Institute, a school for girls, was erected in its place.

She spent her life in training girls for usefulness and in doing good. She founded a school in which girls would be taught the Bible daily, and trained in the domestic and useful callings of life. ‘I was sick and you visisted me.’ By her neighbors.

Charlotte Fall Fanning was the sister of the Philip Fall, one of the most influential preachers in the south. Under her brother’s tutelege, Charlotte received a classical education and learned Greek, Hebrew, Latin, German and French. She was an excellent teacher, and she worked alongside her husband, Tolbert Fanning, to provide a Christian education for young people.

David Lipscomb (1831-1917) was a leading voice in the Restoration movement and one of the principle figures in churches of Christ. He became the editor of the Gospel Advocate in 1866, serving in this position for 50 years. Along with James A. Harding, in 1891 Lipscomb founded the Nashville Bible School, a school that would later become David Lipscomb College and later still Lipscomb Univeristy. In 1906, he would declare to the census bureau that Churches of Christ and Disciples of Christ were indeed separate groups. He stood with Churches of Christ in the issues that had divided them, insisting in a capella music in worship and objecting to the missionary society as a valid means of spreading the gospel.  Additionally, he was a staunch pacifist and opposed to Christian participation in the government.

David’s older brother, William Lipscomb (1829-1908), helped co-found the Gospel Advocate periodical with Tolbert Fanning in 1855, the most prominent and longest lasting journal in churches of Christ. He served as co-editor from its inception until its hiatus in 1861 due to the Civil War. In his writing, he emphasized Christian resposibility and need for a devotional life. 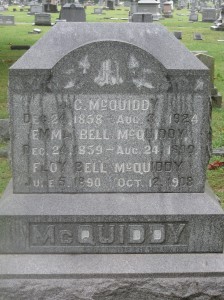 The lives of F. D. Srygley (1856-1900) and J. C. McQuiddy (1858-1924) were contemporaries and had many associations together. They both attended Mars’ Hill College, operated by T. B. Larimore. After school, both men worked with The Old Path Guide, a paper started in Louisville, KY in 1879 by F.G. Allen. Later, their paths would cross again with the Gospel Advocate. In 1885, McQuiddy became the office editor and business manager of the Gospel Advocate, and the paper excelled under his watch. Four years later, McQuiddy would convinc F. D. Srygley to become one of the editors of the periodical. Srygley would go on to write many books espousing the cause of New Testament Christianity before passing away in 1900. McQuiddy started the McQuiddy Publishing Co. in 1902, a company that attained great success in the printing business.